High end custom closets are a staple in many luxury homes in Las Vegas. Most of them are not only attractive but also functional—giving you that wow factor that ordinary walk-in closets lack. Walk-in closets nowadays are more than shelves and drawers; they are edgier and efficient, designed for luxury and productivity.

Have you pondered on the details of your own luxury walk-in closet if you can spend on it? With a wide range of style ideas presented in magazines and the internet, deciding which one to settle with can be hard. Different styles may appeal to you. It is tempting to mix and match. But high-end custom closets achieve the luxury level by way of harmony and elegance.

With elegance and productivity in mind, the custom walk-in closet in the Ravenwood model home was built through a process involving an interior designer. No budget was set for the closet, which allowed Closets Las Vegas to customize most of the closet’s features.

Closets Las Vegas follows a strict process in conceptualizing and building high-end custom walk-in closets. The Ravenwood project is no exception, and it took a series of brainstorming with the builder, interior designer, and its own creative and building team.

The builder handed Closets Las Vegas the model home’s design based on the interior designer’s concept. Included in the plan are the theme, color, and furniture, among others. This gave Closets Las Vegas a clearer picture to build on.

It is important that the builder and interior designer are on the same page from the smallest to the biggest detail. Both parties came together and discussed the floor plan, the exact colors and materials they would use, and the possible features that they incorporate into the walk-in closet.

Once they reached an agreement, Closets Las Vegas met with the interior designer personally in her design center, where the team can look at the more comprehensive design presentation. This meeting allowed both creative teams to further plan how they can incorporate the colors, materials, and furnishings.

Ravenwood project’s interior designer asked for a walk-in closet with a wow factor, something that will stun you the moment you walk into it and leave you feeling still amazed when you walk out. As always, Closets Las Vegas’ team of designers and builders brainstormed on how to create a closet designed to be luxurious and cutting edge for years down the road.

This collaboration between Closets Las Vegas’ and Richmond American Homes is another milestone for the team, having tried something new that can be employed in future projects as well. The outcome proves its success. Outstanding and jaw-dropping, one could hardly ignore the closet’s sophisticated features and modern design from floor to wall to ceiling. 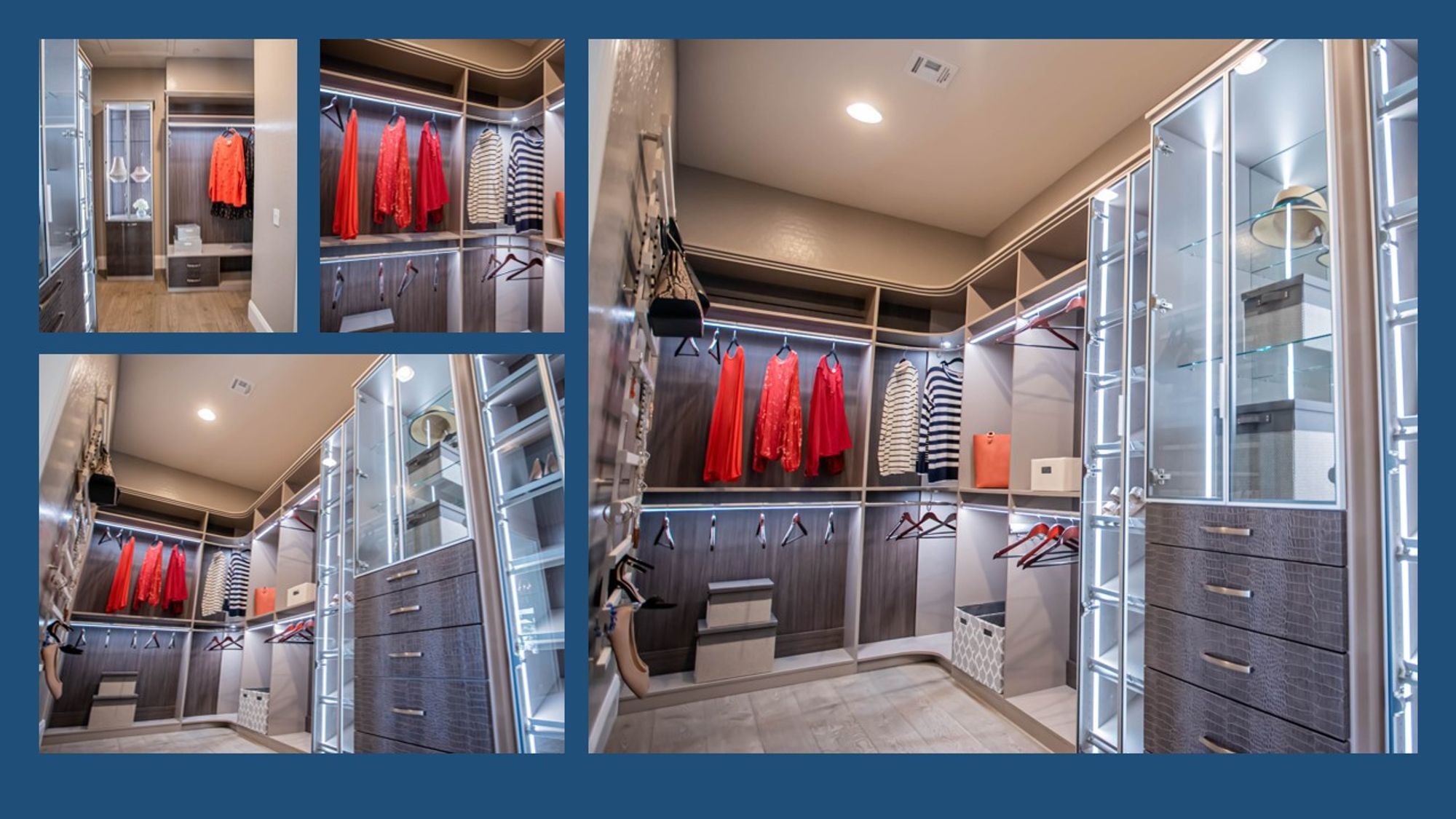 And since no budget concerns limited them from exploring, the team decided to even customize the handles, shoe fences, and frames, among others. Their goal is to create a master closet design that will remain stuck in your mind years down the road, so they went the extra mile without overdoing it. 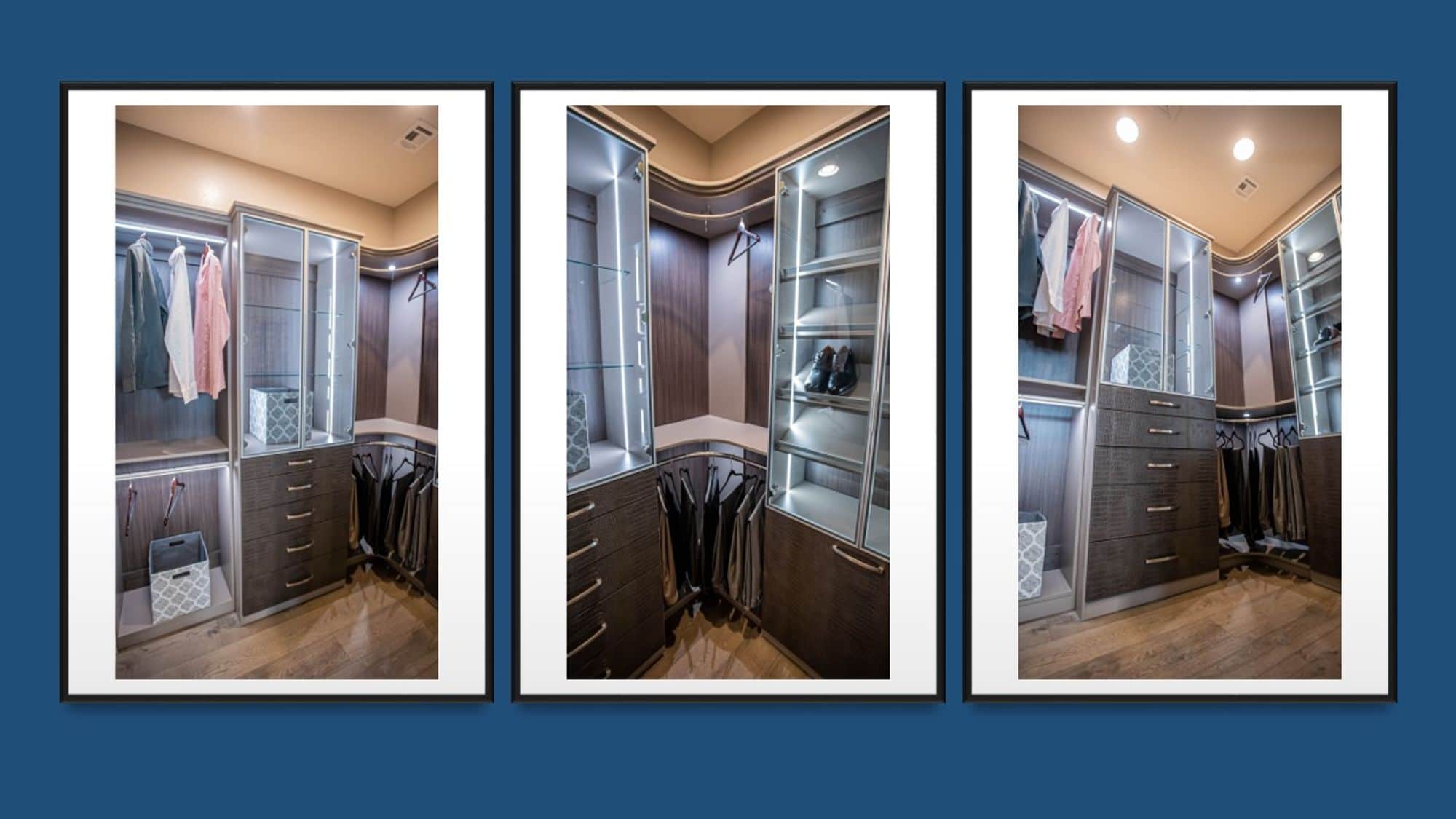 Out of a number of high-end custom closets that Closets Las Vegas has worked on, the Ravenwood model home is special. The freedom from budget concerns allowed them to use distinct crocodile pattern drawer fronts, which they had custom-made. The hamper fronts sport the alligator texture, too, for consistency. The same goes with the blue, leather-wrapped drawer front.

Closets Las Vegas also decided to minimize the system holes, putting them only in places where needed. These custom drawers for the closet alone already give that wow factor the builder was going for. 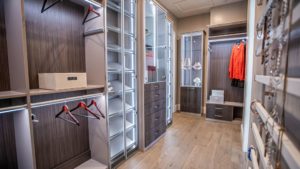 The walk-in closet’s shelves have aluminum-framed glass doors that are slightly tinted so that the lighting inside would not be too intimidating but visible enough. The combination turned out perfect as it effectively stressed the shelves’ elegant feel.  For the frame, the team opted for aluminum instead of wood to match the home’s design theme.

The interior designer and Closets Las Vegas share the same principle when it comes to designing high-end custom closets – make it functional, lasting, and stylish. And what better way to style expensive walk in closets than to fill it in with elegant furnishings.

And true enough, this walk-in closet is not just clothes and shoes. There are also lighted display cabinets with hampers, lovely furniture pieces, and art décor to add an extra wow.

It’s the 21st century, the digital age when you can add smart to anything – smartphone, smartwatch, smart home. Why not make a luxury walk-in closet smart, too? Closets Las Vegas did so! The lighting system, for one, is remote-control operated.  Placed above the round rods, each shelf has its own lighting that can be activated during prep time, making it easier to browse through the clothes.

Shoe racks for him and for her

Luxury shoe racks have become a prominent feature in expensive walk in closets. The team decided to set up two of them, enough to accommodate a number of shoes for him and for her. A remote-controlled lighting system is also installed to illuminate the racks’ interior, making shoe selection an experience rather than a chore.

With the Ravenwood project, we’re not only talking about an expensive walk-in closet but an extraordinary one. And the best way to emphasize its high-end appeal is to use exotic faux animal skin, namely the striking man-made crocodile pattern drawer fronts.

No animal was harmed in the making of these drawers. This type of texture is laser etched onto the wood and then stained with different shades. For this master closet design, Closets Las Vegas opted for dark shade so it goes well with the room’s color palette.

As expected, the closet turned out great, with the drawers leading the design. While the drawer fronts are subtle, the effect is overwhelming for any visitor. Closets Las Vegas’ choice of texture, which was used for both him and her sides, gave the room an aura of prestige. 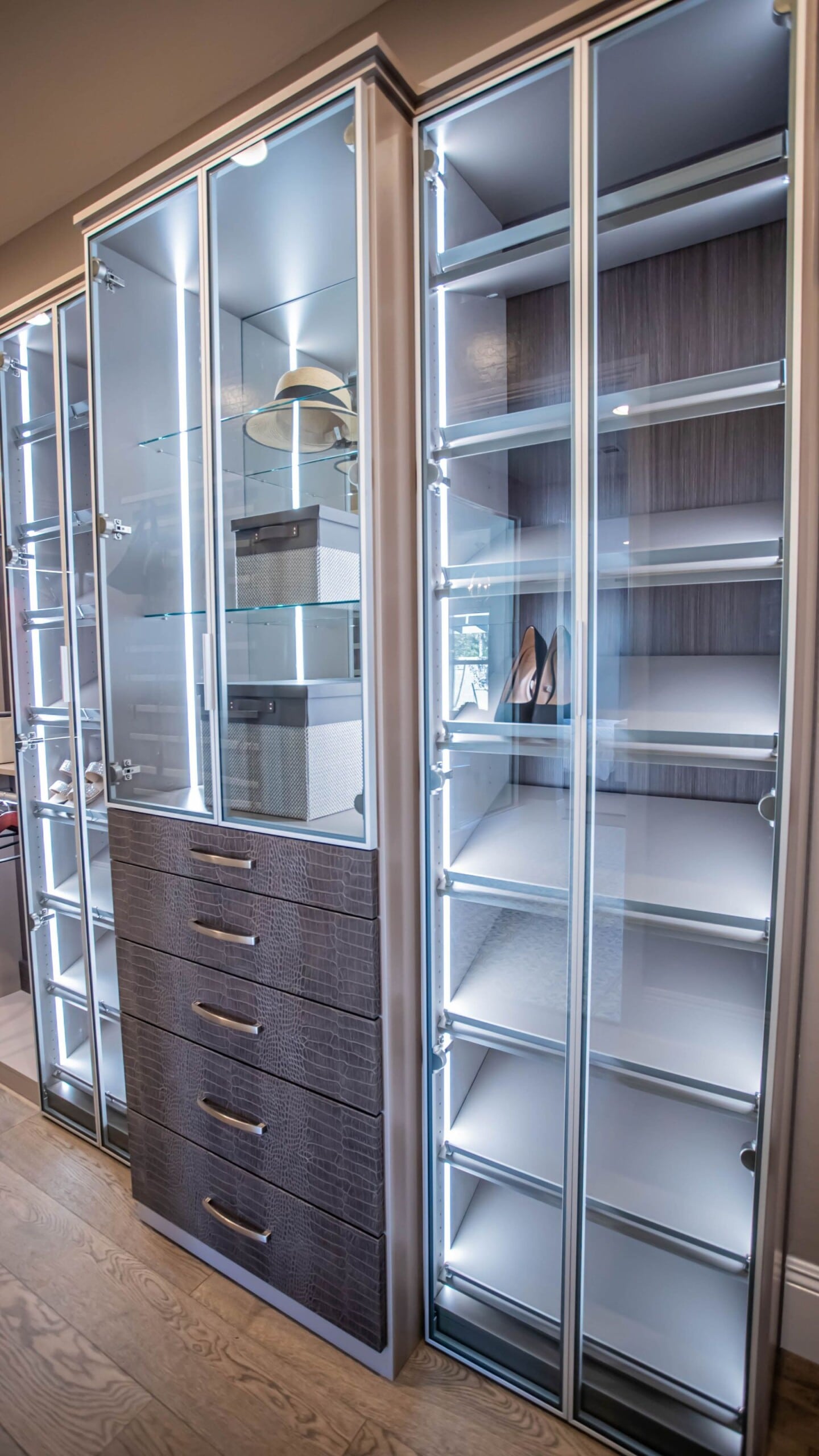 High-end custom closets are built with an excellent team of closet builders in Las Vegas. If you want to have your dream luxury walk-in closet set up, call the experts. A project this big can be tricky and complex that average builders cannot accomplish with efficiency and precision.

Have skilled hands and innovative minds help you. Closets Las Vegas’ years of experience and range of knowledge in luxury closet building will never disappoint. Our team of master builders and designers will help you conceptualize the design of your closet, style it accordingly, and build it for your productivity and pleasure.

At Closets Las Vegas, we create closets like it’s ours. This serves as our guiding principle in making remarkable walk-in closets regardless of its size. To know more about how we can help you, give us a call today or drop by our showroom, where you are always welcome.

To Get Organizing News, Tips, & Videos

Already have a competitor quote and design? Not only are we likely to beat the quote with a better price, but our design team will improve the quality of the design. Call us today!

Builders we proudly serve... (and can roll your purchase into the home loan)