WHEN ONLY “THE UNFORGETTABLE CLOSET GUY” WILL DO 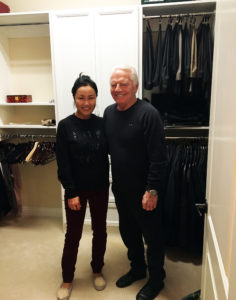 There are plenty of reasons strangers suddenly become memorable for us – an airline agent that rescues us from a missed flight, a server that helps us create a phenomenal special occasion – or in some cases, a contractor that creates a home environment we fall in love with. This is a story about a home developer and a closet guy that fall into that category.

Gary Peters and his wife purchased their dream Henderson home in the fall of 2012, and it was shortly afterwards they had the opportunity to meet the man who was going to transform their closets to match the dream. Joe Ferraro met with the Peters’, designed their new closets, and arranged installation for them – all to be done prior to their moving in just after Christmas.

But Gary Peters recognized that Joe was more than just a typical closet designer. “For decades, I was a home and community developer in Southern California – and my career resulted in more than one Gold Nugget Award Winning home. So I had developed a bit of a ‘sixth sense’ about contractors,” Gary Peters explains.  “I could tell that Joe Ferraro was my kind of guy: He knew his business inside and out, and he cared about doing what was right for his customers. So, when I bought my new Classica closets from Joe on November 12, 2012 – I was sure I’d made the right decision.” (Gary said he remembers the date because as a developer, he held onto his original drawings from that meeting. “That came in handy for me!”)

That’s not to say that the entire experience went off without a hitch, of course. As it turned out, the installer left something to be desired and fell behind on the job – jeopardizing the Christmas move-in the Peters’ had planned. “But one call to Joe, and he made sure that even with the Christmas Eve holiday – the job got done on time. That kind of follow-up and commitment made an impression on me,” Gary adds.

Fast forward a few years, and an unfortunate plumbing leak in the Peters’ laundry room led to damaging that admired custom master closet on the other side of the wall. After having the leak repaired, Gary needed to have several pieces of the closet replaced due to the water damage. Who do you think he would he turn to? Well, Joe Ferraro, of course.

Unbeknownst to Gary Peters, though, in the meantime Joe had changed locations, opening up Closets Las Vegas at its current W. Warm Springs Road site. His initial attempts to locate Ferraro were unsuccessful, leading him to think perhaps he had closed up shop or move out of state. 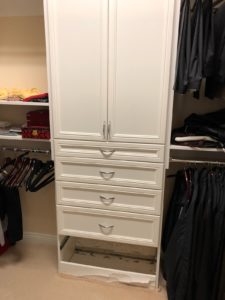 But then he reached out to some other closet companies (out of necessity) to get his repairs done for his master closet – and that’s when it became apparent that Joe Ferraro wasn’t known only to his customers for his dedication – he had an excellent reputation among his fellow closet contractors, too.

“I knew that Joe was unforgettable to me, as a customer. But it was gratifying to learn that he’s also well-known in his own industry for being great at his work,” Peters reveals. “I say that because when I contacted other closet companies, they told me that Joe was the guy to see to be able to match the same materials in my closet and that he’d take care of me. And being in construction, I knew that was unusual.

The typical contractor response would be to replace the whole closet, or do their best to match parts. But the fact that they were comfortable telling me that Joe Ferraro was the best person to handle my needs – and how to reach him – was a big deal to me.”

“And they were right, of course,” Peters goes on to explain. “Once I found him, I was happy to see how his business had grown, and to discover that he had gathered a phenomenal team to work with him. Everyone I dealt with at Closets Las Vegas was an A++ employee. From my first phone call, to ordering the parts I needed for the repair, to the talented installer he sent to handle the job – it was all done first-class. I received friendly, on-time, high quality service every step of the way – which is something that I know how to recognize. And it was really a pleasure to work with all of his team.”

The best part, of course, is the happy ending. 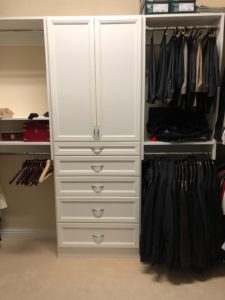 “When the installer came out to do my repairs – which were extensive – not only was his work exceptional, but he also took time to correct some of the problems I had with the original installation – like fixing the baseboard, and re-aligning the drawers. I was so impressed with his dedication to making it look perfect. Plus, he was so orderly and methodical, he got it all done in only 3-1/2 hours.

“I really couldn’t have asked for a better experience. Joe Ferraro and Closets Las Vegas know closets and how to design them so expertly – that now that I know where to find him, I won’t work with any other company!”

Builders we proudly serve... (and can roll your purchase into the home loan)